Through the voices of those recovering from gambling concerns, we learn about struggles but also about  strength and resilience. Together with people with lived experience of homelessness and gambling  our team has created products and tools to raise awareness, inspire hope for recovery and support service delivery.   We are very grateful to Vincent, Jason and Phil for sharing their stories with us.

In this video, Vincent shares his story. He tells us about his  strategies for managing gambling and hopes and dreams for the future

A Conversation with Jason

Jason spoke to us about his experiences with gambling, the impact is has had for him in his life  and what he is doing to support his recovery journey. Jason provides a strong message of hope that recovery is possible. 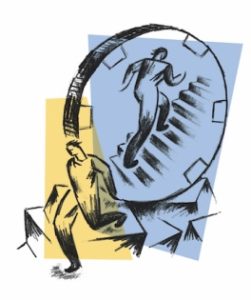 I met Phil in late August of 2017. We spoke at Good Shepherd Ministries a shelter in downtown Toronto, where he was living and receiving treatment for problem gambling. The hard-working 58-year-old spoke to me about his life as a salesman and a security guard, and the empathy that got him by.

“You’ve got to be a salesman when you’re a security guard, truly, because you have to deal with people,” he says. He was a strong orator, with a deep and clear voice. “Some people you have to deal with are just…” he pauses. “But, if you treat them like human beings, they’ll treat you that way, too. It doesn’t matter how drunk a person was, I always knew how to talk to them…I’ve been in roles where I may as well have been in the military.”

Phil was always a defender. Growing up, he experienced a lot of abuse. His father often physically abused his mother, and once attempted to kill her. Phil would try to shield her from his father’s rage. In fear, Phil’s mother never wanted him to leave her side. Anytime he tried to leave the house, she’d call for him to come right back home. He was concerned for her safety, but he also felt trapped.

In his teen years, he started gambling and drinking heavily. When he wasn’t gambling, he thought about everything that was going on at home. It became his escape.

“As I started losing, I sold everything. I had nothing. It doesn’t feel good, to have everything, and then have nothing.”

“I basically went into a cave…I had money and worked…[so] I started buying lottery tickets to occupy my time. They kept me busy…I thought it was okay.”

Men can develop problem gambling as a way to cope with early life trauma, such as abuse and neglect experienced in childhood, says Dr. Flora Matheson, a research scientist at the Centre for Urban Health Solutions at St. Michael’s Hospital. Men who lack healthy role models and support may look for ways, like gambling, to forget about pain.

For Phil, gambling became a more serious concern later in life. In 2002, he received a sizable inheritance when his father passed away. A friend told him about a casino in Ajax, Ontario, and he decided to try his luck. In his first couple of plays, he lost big sums of money—$1500 and $2000—but he went back. “I just start, I can’t stop,” he said. The slots had him hooked.

During his third visit, he won $666, then $10,000, then another $1700. His big wins attracted the interest of a woman. They started dating, and she manipulated him into giving her his savings.

He thought he could win it all back at the casino, but he kept losing. He was running out of money, and had to sell his laptop, his TV, and all of his other possessions. Sooner or later, he lost his home: an upscale apartment in Toronto.

“I was living in a beautiful place at Main and Gerrard. It was basically the penthouse. It was gorgeous—my own place,” he said. “As I started losing, I sold everything. I had nothing. It doesn’t feel good, to have everything, and then have nothing.”

According to Dr. Matheson’s research, there is a strong link between problem gambling and homelessness. Men experiencing poverty are nine times more likely than the general population to develop problem gambling.

Gambling proved to be an insidious past-time for Phil, not only leaving him homeless, but worsening his mental and physical health. Homelessness deepened his depression, and worsened his diabetic symptoms.

“My health is deteriorating…I may have to go on insulin. The only thing gambling is going to do is make me sicker….it’s like a drug.”

Still, Phil is resilient. He’s confident that he can stop gambling the way he surmounted other hurdles in his life. He stopped drinking two years ago, and has been clean from drugs from over 17.

“I’m never going to give up, because I’m fighting,” he says with conviction. “I’m a fighter. So I’m going to keep on fighting.”

He joined the Gambling Addiction Program at Good Shepherd Ministries in Toronto where he receives individual counseling, and help for his specific housing and health needs. He participates in the cognitive-behaviour and life skills group, and attends Gambler’s Anonymous. He says the programs have helped him understand why he turned to gambling. On his own, Phil has personal strategies that help him resist gambling urges. Playing games on his cellphone distract him from buying scratch tickets.

“I play my games. I plug my phone in. I got my charger. I go over to the rec centre and I sit there and play…I don’t think [about gambling],” he said.

Phil is also grateful. Despite everything, he described feeling like something out there is watching over him. He’s looking forward to what the rest of his life has to offer. Soon, he will be getting permanent dentures. He lost his teeth to a past addiction with crack cocaine, making it difficult for him to eat.

“I can smile for pictures. You know how that feels?” he smiles. “It will be different. You’re chewing, your pace is slower, and not only that, but apparently you’ll talk differently.”

“I could be 58 years old, [and] it will take some time to adjust. But you know what, I got all the time in the world,” he laughs. I’ll get my own damn teeth.”

Our Research ›
Publication ›
In the Press ›