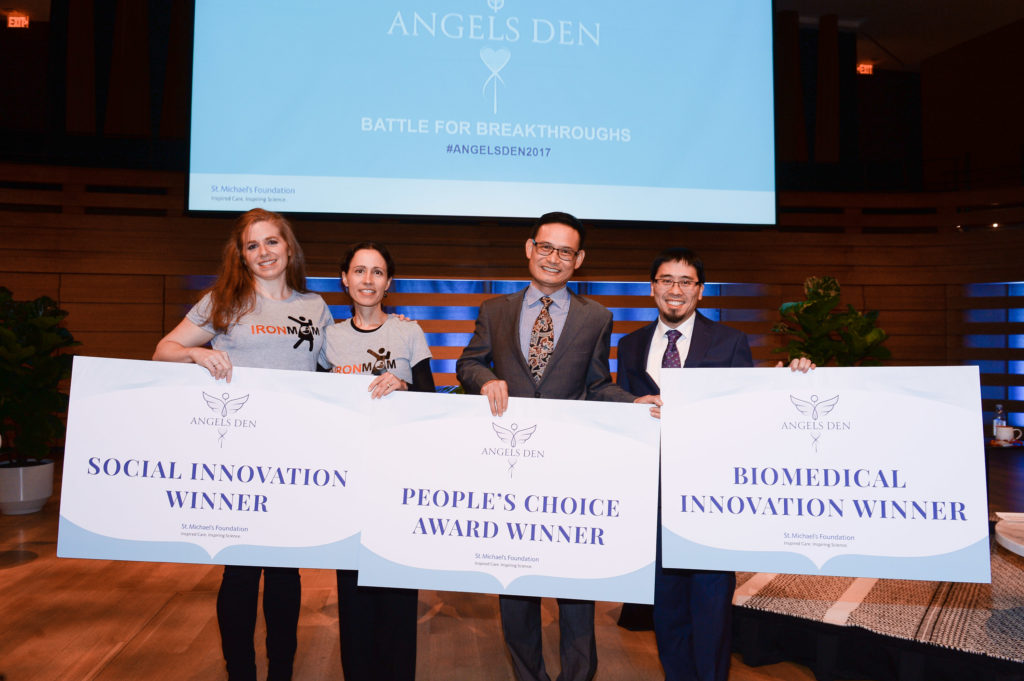 Even though science has once again become cool in Canada and is trending on Twitter – the prime minister can explain quantum physics! The governor general is an astronaut! – competition for government research funding remains intense.

Many research institutions, including St. Michael’s , have had to think outside the lab and find innovative ways to raise money from other sources to maintain existing programs and recruit international talent.

The third annual Angels Den event, a reality-TV-style contest to decide which two teams of researchers from St. Michael’s took home at least $50,000 each in innovation funding, was hosted by CHFI’s Maureen Holloway and was the first to feature celebrity judges Mimran, Wekerle and Romanow.

“St. Michael’s is trying to speed up knowledge translation by bringing researchers and clinicians together in a friendly competition for research funding,” said Dr. Arthur Slutsky, vice-president of research at St. Michael’s. “The hospital’s best and brightest scientific and clinical talent were asked to team up and share their most promising ideas.”

Eight pairs of researchers were selected to pitch their research projects to the judges and a panel of prominent jurors. Four presented social innovation projects or tools to ensure all patients have access to quality health care, including members of vulnerable or disadvantaged communities.
The three event co-chairs pose with the three celebrity judges. From left to right: Gwen Harvey, Michael Wekerle, Michele Romanow, John Hunkin, Melissa Martin and Joe Mimran. (Photo by George Pimentel)

The other four presented projects aimed at transforming scientific discoveries into new therapies, diagnostics, vaccines or devices that will improve patients’ lives.

First prize in both categories was $50,000, and also came with additional funding to cover expenses to an invitation-only competition hosted in Hong Kong by the Global Healthcare Innovation Academy. The remaining six teams each received $10,000.

All eight teams were surprised with $10,000 from the judges—$5,000 each from Mimran and Wekerle—who said they were overwhelmingly impressed with the quality of the projects and presentations.

The winning social innovation project was IRON MOM, presented by Dr. Michelle Sholzberg and Dr. Lisa Hicks, both hematologists at St. Michael’s. IRON MOM uses a set of digital tools to educate clinicians and families about the effects of anemia and iron deficiency in pregnancy.

Anemia is common in pregnancy and can cause problems including premature delivery, low birthweight, childhood anemia, postpartum depression and even death, according to Drs. Sholzberg and Hicks.

“Low iron is easy to detect and almost as easy to treat, but is not often recognized or managed, especially in pregnancy,” said Dr. Sholzberg. “IRON MOM offers tools to make it easy for a medical team to recognize and treat low iron before it becomes severe, educates moms about low iron, and empowers women in their own health care.”

The “Flu Fighters” were the winning biomedical innovation. The project, led by Dr. Warren Lee, a scientist in the Keenan Research Centre for Biomedical Sciences, and Dr. Xiao-Yan Wen, director of the Zebrafish Centre for Advanced Drug Discovery at St. Michael’s, uses zebrafish to find new compounds to treat the influenza virus.

Once they find drugs that protect the fish, they will confirm their effectiveness and study how they work. By testing promising compounds in zebrafish, the Flu Fighters project will quickly identify drugs with the potential for protecting people from the next influenza pandemic.

More than 500 people attended St. Michael’s third Angels’ Den event, which for the first time was held off-site at Koerner Hall in the Royal Conservatory of Music’s TELUS Centre for Performance and Learning.

“Three years ago this event was held with 50 people in a class room, two years ago we had 100 people in the Allan Waters Family Auditorium in the Keenan Research Centre, and this year 500 people packed Koerner Hall,” said Gwen Harvey, one of the events three co-chairs. “While this year our dream came true and we had a top notch host in Maureen Holloway, and three real life hosts, what remained the same was the outstanding research presented, that captivated the audience and made all realize how much research matters”

While the jurors voted on the overall winners, every member of the audience was able to vote for a People’s Choice award. The audience agreed with the jury and the $10,000 award also went to Drs. Warren Lee and Xiao-Yan Wen.