Immunohistochemistry (IHC) is the localization of antigens in tissue sections by the use of labelled antibody as specific reagents through antigen-antibody interactions that are visualized by a marker such as fluorescent dye, enzyme, radioactive element or colloidal gold.

Since immunohistochemistry involves specific antigen-antibody reaction, it has apparent advantages over traditionally used special enzyme staining techniques that identify only a limited number of proteins, enzymes and tissue structures. Therefore, immunohistochemistry has become a crucial technique and is widely used in many medical research laboratories as well as clinical diagnostics.

The principle of IHC has existed since the 1930s, but it was not until 1941 that the first IHC study was reported. Dr. Albert Coons and his coworkers used Fluorescein isothiocyanate (FITC)-labelled antibodies to localize Pneumococcal antigens in infected tissues. Since then, with improvement and development of protein conjugation, enzyme labels have been introduced, such as peroxidase and alkaline phosphatase. Colloidal gold label has also been discovered and used to identify immunohistochemical reactions at both light and electron microscopy levels. Other labels include radioactive elements, and the immunoreaction can be visualized by autoradiography. All of these make immunohistochemistry a routine and essential tool in diagnostic and research laboratories.

Immune cells, or B cells, produce antibodies against targeted proteins. These antibodies then can recognize, and bind to, those proteins, called antigens. More specifically, they have an affinity for certain sites on those antigens, called epitopes.

Immunohistochemistry takes advantage of antigen-antibody affinity through its ability to identify and localize proteins of interest via detection with labelled conjugates. In the simplest example, a primary antibody (first in order of use, directed to the antigen epitope) which has had a label attached, is allowed to bind. The antibody, and thus the antigen on the tissue surface, is then detected through a series of treatments, which will visualize the label for analysis and quantification. 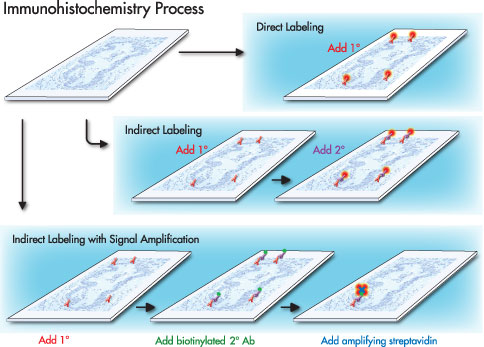 Direct method is a one step staining method, and involves a labelled antibody (i.e. FITC conjugated antiserum) reacting directly with the antigen in tissue sections. This technique utilizes only one antibody and the procedure is short and quick. However, it is insensitive due to little signal amplification and rarely used since the introduction of the indirect method.

The second layer antibody can be labelled with a fluorescent dye such as FITC, rhodamine or Texas red, and this is called the indirect immunofluorescence method. The second layer antibody may be labelled with an enzyme such as peroxidase, alkaline phosphatase or glucose oxidase, and this is called the indirect immunoenzyme method.

PAP method is a further development of the indirect technique and it involves a third layer which is a rabbit antibody to peroxidase, coupled with peroxidase to make a very stable peroxidase anti-peroxidase complex. The complex, composed of rabbit gaba-globulin and peroxidase, acts as a third layer antigen and becomes bound to the unconjugated goat anti-rabbit gaba-globulin of the second layer. The sensitivity is about 100 to 1000 times higher since the peroxidase molecule is not chemically conjugated to the anti-IgG but immunologically bound, and loses none of its enzyme activity. It also allows for much higher dilution of the primary antibody, thus eliminating many of the unwanted antibodies and reducing non-specific background staining.

ABC method is a standard IHC method and is one of the widely used technique for immunhistochemical staining. Avidin, a large glycoprotein, can be labelled with peroxidase or fluorescein and has a very high affinity for biotin. Biotin, a low molecular weight vitamin, can be conjugated to a variety of biological molecules such as antibodies.