During apoptosis, a general view of cellular events involves the activation of caspases, programmed destruction of protein and DNA, loss of cell membrane asymmetry (external leaflet exposure of Phosphatidyl serine or PS), and eventual loss of the integrity of the plasma membrane. Older views posit that this is a one way ticket, but emerging evidence suggests that this is a somewhat bi-directional process. The bolded events are commonly measured in some of the most accessible assays of cell viability.

The “easiest” assessment of cell viability is to stain either dead cells with a membrane impermeant dye (PI, 7AAD, SYTOX dyes, or fixable viability dyes from eBiosciences/BD/LifeTechnologies, etc.) or to stain live cells specifically with dyes which require esterase enzymatic processing (Calcien-AM, CFSE, CellTrace Violet, etc) or to use both in conjunction. The protocol for these reagents is specific to the probe you select and generally quite easy so no protocol is supplied on this website. 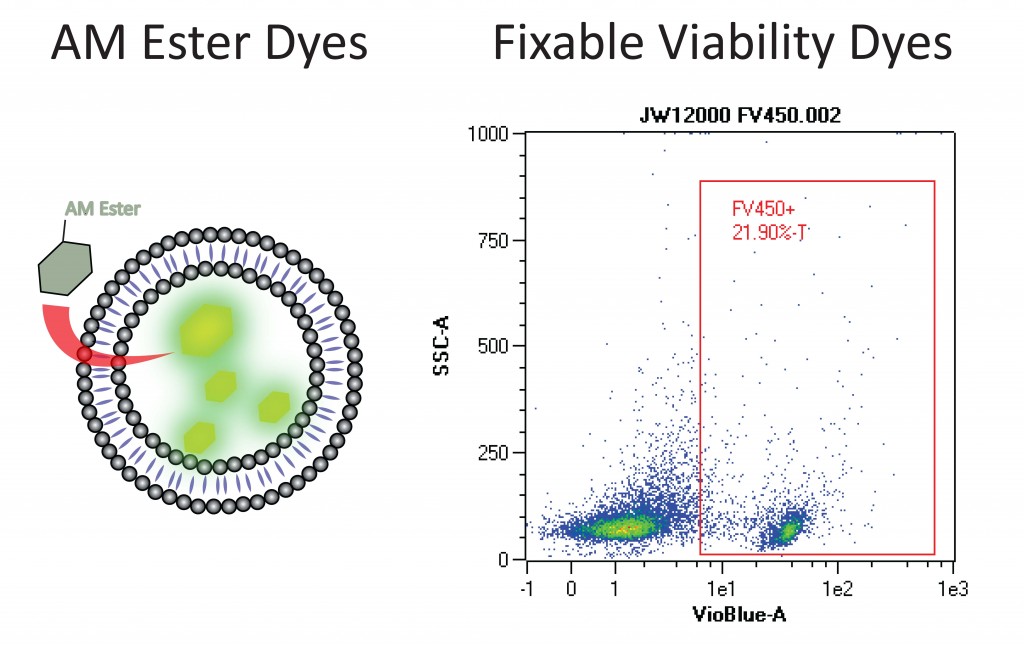 Fig1. Dyes like Calcien are membrane impermeant unless they are conjugated to an AM ester (left panel), masking a charged group and allowing them to enter the cell. The AM ester is then cleaved by nonspecific esterases in live cells and the dye in most cases then reacts to form a stable fluorescent moiety on intracellular protein groups. Thus live cells label with CalcienAM, CFSE, etc. while dead cells do not. Fixable viability dyes like FV450 (right panel) enter dead cells (as does PI) and can be fixed to allow for subsequent intracellular staining while maintaining a fluorescent label to allow for dead cell exclusion (unlike PI).

A slightly more comprehensive assessment of cell viability involves to staining cells for PS externalization (using annexin V protein conjugated to a fluorophore) and membrane integrity (using membrane impermeable probes such as PI or 7AAD that can only enter cells with compromised membranes). This is outlined in the protocol annexin/PI assessment of apoptosis .

The primary complication with this protocol is that annexin dissociates rapidly in the absence of calcium, so the annexin V “staining buffer” (commercial or homemade: a recipe is in the protocol annexin/PI assessment of apoptosis) must be included in any stained samples including wash steps. The other issue that this presents is that some cells are unhappy in the high-calcium environment or re-form cell-cell contacts in the presence of calcium. As such, it may be helpful instead to use PO-PRO in place of annexin.

It is important to note that unlike cell cycle protocols, this protocol requires that all buffers do not contain detergent or premeabilizing agents (so the PI should be solubilized in PBS/water or the PI will stain all cells. The protocol annexin/PI assessment of apoptosis also includes modifications and recommendations for combining this staining procedure with parallel assessment of surface and intracellular staining (i.e. assessment of cell viability of specific sub-populations). 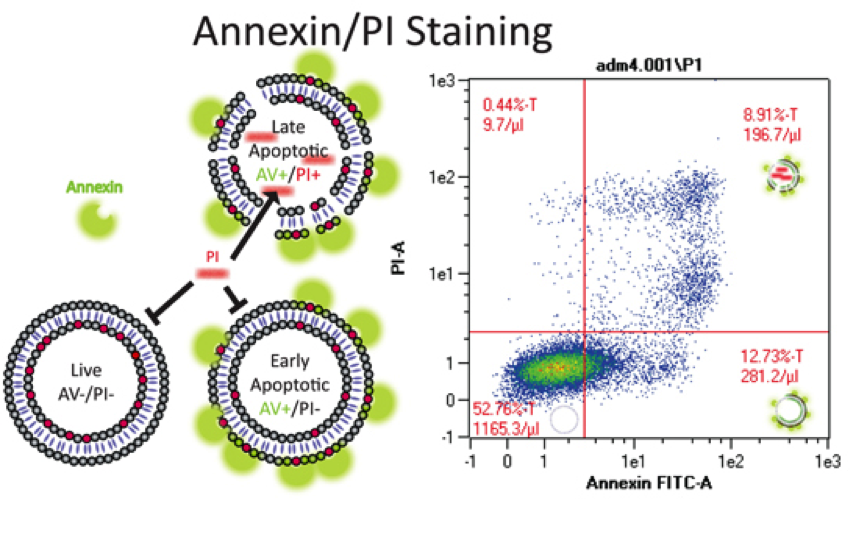 Fig.2 Dual staining with annexin V and PI. In a live, intact cell, PI cannot enter the cell and label dsDNA/RNA and phosphatidyl serine (PS) is maintained exclusively on the inner leaflet via flippase, resulting in negative staining for both dyes. Annexin V labels externalized PS- on the cell surface (green moieties on the left panel; 12.73% in the cytogram) following the initiation of apoptosis. During the latter stages of apoptosis both PS is exposed and PI can enter the cell (red star on left panel) due to the loss of membrane integrity (8.91% in the cytogram).

In some primary cells and adherent cells it has been suggested that PI false-positivity can arise due to cytoplasmic RNA staining. A modified protocol involving fixation of Annexin V and RNA degradation prior to analysis appears to address this (see useful links at the top right of this page). However, others suggest that fixation can reduce Annexin V staining. If this is a concern it is recommended that a pilot experiment be done to determine the effects on your cells and experimental system with the aid of the flow cytometry staff.

Finally there are several commercially available kits and substrates that fluorescently report caspase activation as a readout of cellular apoptosis. These come in a variety of flavors from Life Technologies (CellEvent and Vybrant FAM assay kits) Immunochemistry Technologies (FLICA kits) and PhiPhiLux (which is detailed extensively in Methods in Molecular Biology). The links for these are provided in the useful links part of this page (see upper right of this page) and protocols for these are supplied by the manufacturer.